Thanks to a certain classic movie, many people still have an image in their mind of a British chimney sweep dancing on the rooftops and singing in a very bad cockney accent!. Fortunately, the simple truth is, Victorian chimney sweeps don’t exist any more. Not only that, but I don’t think the Health and Safety Executive would allow it. Moreover, these days fewer people use coal fires for heating. So, householders and buy-to-let owners remove their chimney breasts to give valuable room within their properties.

The average cost of chimney breast removal in the UK, for a typical British home, will be around £1500 on average, below we will break down the pricing in more detail. 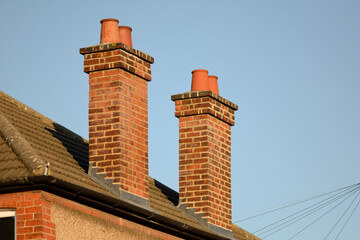 How Much Does Chimney Breast Removal Cost?

If you want to know the answer to this question, we must consider five scenarios.

If you have additional floors in your property then add on the cost of removing an additional breast.

We won’t go into the steps in great detail, because each case is unique depending on how the chimney was originally built. But, there are stages that each chimney has in common. So, we’ll leave the detail to the professionals.

Remember that chimney removal prices will vary depending on the difficulty of access, amount of scaffolding required and where you live in the country. Labour costs in London and the Southeast will be between 15% and 20% more.

This will take 2 people, approximately 4 days, plus making good and plastering. And, will cost about £1,800.

This will take 2 people about 3 days, plus making good, plastering and decorating. Costs will be about £1,500.

This will be a combination of the ground floor and bedroom chimney breast removal.

It will take 2 people about 5 to 6 days and cost about £2,300. Making good and plastering will be extra.

Fortunately, if you start at the top and work down,  you won’t have to support the chimney breast at various stages throughout the work.

This will take 2 people about 7 days and cost about £4,000. Internal making–good will cost extra.

What is a chimney breast?

We’ve all seen a chimney stack poking out of a rooftop. But, that’s only a small part of the entire length. And anyway, it only takes up room in the loft, so that doesn’t count.

The chimney breast is the part that sticks out into the downstairs and upstairs living rooms. It encloses the flue that carries the smoke and other exhaust gases to the open air.

Why would someone want to remove the chimney breast?

There are a few good reasons, and all of them make sense.

You no longer have an open fire in the living room or bedroom. So, you don’t need the ventilation for exhaust gases. And, you prefer not to lose valuable heat up the chimney.

Surprisingly, a chimney breast uses a lot of room. British houses are notoriously small compared to some other countries. So, it makes sense to have as much usable space in our rooms as possible. Not only will removing a chimney make life better for you. But, if you have central heating using another type of fuel, you’ll find it shouldn’t reduce the value of your house when you decide to sell.

Remove the hearth too

Where you have a fireplace and chimney breast, you also have a hearth which takes up even more space. Modern regulations state the hearth must protrude in front of the fireplace at least 300mm and at least 150mm either side. Its job is to prevent hot cinders and sparks from landing on your carpet. Moreover, these are usually made from stone or tiled concrete. But, a brick hearth is probably the most common type.

Chimneys require regular maintenance just like any other part of the house. And, this includes having it swept while removing bird nests from the chimney pot. So, if you’re not using it, why spend money on it?

As chimneys age, lead flashing and mortar benching deteriorates and allows damp into the chimney breast. Remove yours before this happens.

While the hearth was in use, the intense heat from the fire causes cracks in the mortar that get worse as time goes on. Eventually, the plaster falls off and you’ll have to repoint the brick chimney breast.

If you live in an old house, the chimney support above the fireplace might be a wooden beam. Over time, the supported weight above the beam will cause it to bend and split. Eventually, it’ll break and the chimney breast will collapse.

Factors which affect the price

Many factors will affect the cost of removing a chimney breast. The variations in price, usually depend on how much of the chimney you intend to remove. Let’s look at a few ideas.

Some detached houses have the breast on the outside of the wall. So, there’s no wasted space indoors. Therefore, if you don’t use a fireplace anymore, you can permanently remove and close a fireplace without removing the chimney breast at all. Instead, remove the hearth and close it either by plasterboarding and plastering the fireplace opening. Or, by bricking up the existing fireplace opening and plastering over that. In both scenarios, you’ll need ventilation to prevent damp. So, include an air vent in the board or bricks. They only cost a few pounds and are well worth the investment.

Often, chimney breasts are load–bearing. They either help carry the loads from the upstairs flooring or carry the weight of the remainder of the chimney and are tied into the structure of the house. This means you must hire a structural engineer to calculate the loads involved and determine the type of chimney support required. If you intend removing the chimney breast from downstairs only, you’ll need a stronger lintel than if you removed everything up to loft level. Usually, a structural engineer will specify a Rolled Steel Joist (RSJ) at every level to support the floors and ceilings as well as the remaining chimney breast. But if the chimney stack is the only remaining part, then a gallows bracket installed in the loft space will probably be adequate.

How much of a state is your chimney breast in? Probably, if the entire length is in poor condition, it’s better to remove everything including the chimney pot. This is the worst possible case, and the most expensive.

Removing a chimney always produces waste rubble. Hire an appropriately sized skip, depending on how much of the chimney you’re removing.

Usually, you’ll need scaffolding. If you are only removing the chimney breasts on various floors, you can get away with a DIY scaffold tower. This will be assembled and dismantled in each room, in turn, starting on the top floor and moving down. However, if you intend removing the chimney stack as well, you’ll need external scaffolding up the outside of the house to gain access from the roof. Then, as soon as the stack has been removed to loft level, close the roof opening and tile it to provide weatherproofing. You can then continue removing the chimney stack in your loft. You can hire scaffold towers from your local hire shop. Or, your builder will probably have a personal set. However, outdoor chimney scaffolding must be assembled by a qualified scaffolding company.

The chimney breast construction method will affect the cost too. Often, in older houses, the chimney breast supports floor joists on each level. The joist ends being cemented into holes cut in the wall. Of course, this depends on the construction method and in which direction the joists run, but it was a very common practice. The main disadvantage of this method is that moisture running down the inside of the chimney would soak through the masonry and cause the timber joists to rot. It’s a common practice nowadays for floor joists to be supported by trimmer joists or RSJs.

Fitting, altering and replacing a chimney comes under the category of ‘Permitted Development’. As such, you probably won’t require planning permission. However, you must comply with certain restrictions which vary depending on where you live. Contact your local planning authority for advice on this.

This sounds like a load of stuff that you know very little about. Don‘t worry, the professionals know what they’re doing. Just hire an architect to draw the plans and submit them to the planning authority.  Then choose a tradesman from the local council’s Competent Person Scheme. By doing this, you don’t need to pay Building Control fees, and the tradesman can sign off their own work without having a Building Control office inspection.

DIY vs. Hiring a professional

You’ve probably realised by now that removing a chimney, or even just a small part of one, isn’t suitable for a DIY project. Use a qualified and skilled professional during the entire operation, to ensure things don’t go wrong. Otherwise, it could be very expensive and dangerous for you and your property.

Can you remove half a chimney stack?

Usually, you can’t remove half of a shared chimney stack, because the bricks are laid in such a way to tie everything together. However, you could demolish the entire stack (with your neighbour’s permission and the council’s agreement), and pay for your neighbour to have their own stack built in its place. Usually, this will be very expensive. So, it’s probably better to leave the stack in place and seal off your side, without removing anything.

Does removing a chimney breast devalue a house?

The answer to this question depends on what type of house you have and its method of heating. Let’s consider the obvious ones first.

So, these are the main arguments for and against having a chimney breast. In our experience, the presence or absence of a fireplace and chimney breast won’t alter the value of the property too much. But, depending on what the prospective buyer prefers, it might affect the house’s saleability.

Can you remove a chimney breast without removing the stack?

Of course! In fact, it’s sometimes far easier to do this than to remove the stack. A qualified builder and a structural engineer will decide how to support the stack while removing the breasts below loft height. Often the council’s planning department and building control office prefer this anyway. It means you won’t alter the outside appearance and character of the house, which is very important in certain areas of the country. Furthermore, you won’t affect the existing weatherproofing between the stack and the roof.

Not always. However, most of the time, a chimney breast’s brickwork ties into the structure of the wall. Furthermore, depending on which way the floor and ceiling joists run in the house, they might be supported by the breast. A qualified builder can overcome both these problems and finish the room to appear as if it was never there. However, it will be expensive to sort out and might interfere with your neighbour’s rights too. If you aren’t sure, ask for advice from a professional.

Removing an entire chimney, or even just a part, can give you more space in your home. Especially, if your heating method no longer needs one. However, it can and will be extremely messy to remove a chimney breast and will cause a lot of upheaval in your home. Whatever you do, don’t try to do it as a weekend DIY job.

Instead, complete the form at the top of the page. And we’ll make sure you have 3 or 4 quotes from qualified and experienced builders local to your area.